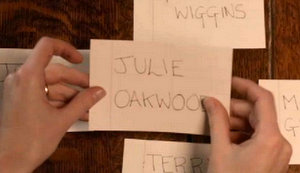 Card sorting is a great technique for a vast range of design activities, including your website’s information architecture or scoping your project.

Can it be used to fight crime?

Serial killer on the loose

Set in the bleak post war period, Susan – now a ‘housewife’ – and her three former colleagues use pattern-recognition techniques honed at Bletchley Park, the top secret British codebreaking centre, in their hunt for a serial killer.

Unable to sleep after a harrowing encounter with the killer, Susan gets up to conduct a card sort – as you do!

She writes the names of all the victims on index cards.

She plays with the cards, sorting them around in different ways – by location, by date – turning concepts over in her mind as she turns them over in her hands. We see her ‘thinking with her hands’. Will it help her get her killer?

Card sorting is a form of mind mapping. As mind mapping pioneer Tony Buzan discovered, pulling ideas apart and moving them around using with text and images can be very powerful for defining, analysing and solving problems.

Which makes sense: maps are a time-honoured tool for externalising thoughts, ideas and understandings. We’ve been sharing our thoughts through maps for a long time. According to an ABC documentary, First Footprints, the oldest known map may be up to 35,000 years old and developed locally.

We’ve all seen cop shows with whiteboards full of photos, maps and connecting lines. The Bletchley Circle use these visualising techniques to help solve their case. When you look at how someone constructs a map you get a glimpse into their head.

It’s the same with card sorting. You’re seeing how concepts and words stick together in people’s minds – a sort of ‘psychological valency’. Card sorting shows how things are connected and related in their imagination.

It shows you how people categorise that information; the words and language they use.

For example, I’ve found card sorting a useful way of managing people on projects. I ask participants to sort project tasks first of all with some simple generic instructions, then sorting by who’s responsible and finally getting team members to make a timeline. The exercise gives fabulous insights into how your team understands the specific project at hand. It’s far more powerful than applying generic project management processes.

Think outside the screen you live in

Although not relevant to crime solving in the 1950s, there’s no question that we now spend a lot of time looking at screens. There are many issues with that. My main issue is that the screen is often too small for creatively exploring ideas.

I often use a whole table to work through a lot of information and complex ideas using card sorting.

Screens are good as long as they are complemented by other forms of information discovery and analysis.

To catch a killer

Coupled with other mathematical and logical techniques, Susan and friends do finally get the man. In an unexpected way.

Her card sorting reveals the answer – the spatial relationships, the pattern, the modus operandi, the killer’s psychology – ultimately leading to a deadly conclusion which I won’t spoil for you here.