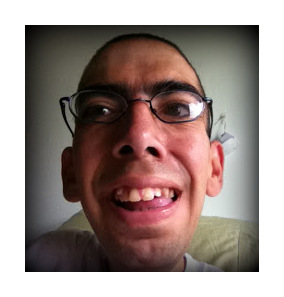 Ismail Gul is a Technology Researcher at Enabled Gaming and a long-time, avid consumer of recreational and communication technology. Ismail (Izzy) is a neighbour and he shared his thoughts on computer accessibility with me over a Turkish coffee one recent afternoon.

Izzy is an optimistic, passionate proponent of the computer’s potential to connect and make people’s lives better. It’s a testament to his character that he remains a ‘technology optimist’ – especially since the makers of computers, operating systems, applications, games, mobile devices and music players treat him so badly, so often.

). “When the brain sends the signal for the muscle to move, the nerves don’t receive it. Over time, the muscles weaken from disuse,” he explains. Bottom-lip joysticks control his motorised wheelchair, and the mouse pointer on his desktop computer and smartphone.

For Izzy the best applications and websites use onscreen keyboards, selecting keys with a mouse pointer. Mouse control is better for games, though this is rare. He’s also had some luck with voice control (more later).

Accessibility is getting worse

I ask Izzy about his experiences accessing websites, applications and, his main love, games. He reckons, “accessibility is getting worse,” rather than better.

Izzy easily reels off several frustrating examples. He cites a recent update to the Facebook chat interface. He says prior to the change,

It was easier when I could open the chat interface in a separate window because I could position it wherever I want. Since the update, a chat window just pops up at the bottom and stays there. You cannot move it. When chatting with multiple people it’s even worse because then you have heaps of little chat windows popping up at the bottom.

“It’s the most used website in the world and with an upgrade that’s meant to make it better,” Izzy laments, chat has become harder.

Another example is a trick that’s become a trend: moused-over images expand and ‘come forward’. Looks really cool… except when your mouse pointer strays over an image sitting (usually) above the keyboard – the image sits over and in front of the keyboard preventing mouse cursor clicks on the keys it is masking.

These issues aren’t trivial or limited to outside Australia. According to ABS data there are 4 million Australians with a reported disability

and just over half access the internet mostly for general browsing, email and chat

Why don’t companies check before making these changes? “Money… it’s expensive and the cost is jacked up when you use the term disability,” Izzy says without rancour. “Ignorance of muscular disability issues as well,” he adds.

I ask Izzy what he does when he encounters these problems. He replies wryly, “I put up with it and find workarounds… sometimes people respond when I email them, usually they don’t.”

The best example of an accessible game is Guild Wars part I (he hasn’t played part II yet). Unlike most online games, Guild Wars I can be controlled with a mouse (apart from naming characters) and allows you to minimise, maximise or close all of its windows.

The few good experiences aside, Izzy says there are worrying trends driving resources and innovation away from accessible technology: more touch screen-based devices and a lack of open source solutions (“Linux is like a desert”) For Izzy. these trends are exacerbated by “everything moving to the web and streaming”.

One promising advance is voice-controlled software. Izzy’s tried Game Commander, Tazti and Voice Attack. Each has its pros and cons and are still works in progress.

To Izzy’s mind, there’s no single solution, “the ideal user interface is a combination of voice, mouse, onscreen keyboard and eye tracking.” After a pause he adds, “but this is expensive.”

An amazing world opened up

A mobile smartphone is a recent accessibility success story. Izzy researched smartphones for a year before settling on Google’s Nexus. I’d have loved to have been at the Broadmeadows phone shop when he arrived to test it and found himself instructing shop assistants on the finer points of its use.

The Google Nexus’ main advantage is that it doesn’t have hardware buttons like other Android phones. This means it connects to his wheelchair and can be mouse-controlled. Being able to keep up with family and friends while he’s out of the house has improved his quality of life. As Izzy puts it: “an amazing world opened up to me.”

This leads us to the topic of embedding accessibility into the design of software and online services. Izzy’s advice for designers is “Keep it Simple, Sweetheart”:

Designers need to have empathy for… be mindful of people in my situation… Take every scenario into account and test, test, test. Software development companies should include people with disabilities as part of their development teams when testing software.

Web content doesn’t escape Izzy’s laser-sharp analysis, either. If early websites looked crappy, at least they were simple. “I visit websites and there’s links everywhere,” Izzy rues, “I go to a news website and it’s just chaos,” he says.

Sit down and just ask

How will making the web more accessible also make it usable for everyone? Developers and designers should start by asking questions. Izzy says,

When Izzy says, “there’s no humanity in technology,” it’s not trite or abstract. It’s a commonsense reminder to design for inclusion.

I feel proud and a little despondent to report that after we spoke, Izzy emailed me: “I’ve never really had anyone sit down and just ask me what my problems with technology are 🙂 ”

**Thanks Izzy for your generosity both in answering my questions and reading over this post. Find out more about Izzy on SBS Insight episode: Breaking Point Tuesday, 4 Sep 12